Life Verse: Psalms 21:  “Lord, the king finds joy in your power; in your victory how greatly he rejoices! “

I have over twenty years of successful soccer coaching and player development experience. I have produced professional and international players plus developed players for NCAA, NAIA, high school and several major clubs in Southern California. My teams have won league, state and national championships, as well as, international cup championships in France and Portugal including a World Championship at the Manchester United Nike Cup in England.

I have played soccer professionally and understand the demands of elite athletes. My journey began with AYSO and eventually I was involved in club and school programs. During my club career, we won our leagues, state and western regional championships in addition to the North American champion. During my four years as the varsity captain, I successfully led our team to multiple league championships, as well as a CIF runner up title. During my senior year I was the league MVP and the Player of the Year for both the Orange County Register and the LA Times after scoring 106 goals during the season. I played two years in college before being recruited to play professionally for five years in Mexico for first division for Irapuato FC, second division Chivas of Guadalajara, and Pumas UNAM. A passion for continuing improvement was the foundation of my playing success. My desire is to share my soccer experiences and knowledge with young and enthusiastic athletes.

I am honored to be a part of the Calvary Chapel High School Athletic program that fosters an environment which surrounds players with quality coaches, trainers and a system so athletes can achieve their goals both on and off the field. With the support of the Calvary Chapel staff, players and parents, I know my athletes will honor our school’s mission to live victoriously as disciples of Christ. 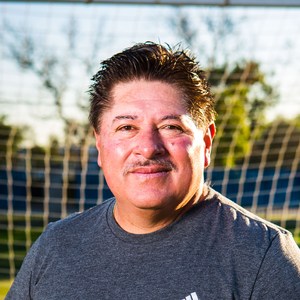