Linda Gooch grew up in Orange County. She went to La Quinta HS in Westminster, where she was a four-year CIF finalist in swim. She was the school's MVP three years and the league's MVP two years. She then swam for Golden West College where she was the JC state champion in the 500 freestyle. She swam her final two years at Cal State Long Beach, specializing in the freestyle events.

She has been married for 26 years to her husband, Carl, whom she met on a swim team! All four of their children are Calvary "lifers".

Linda coached for Golden West Swim Club for 10 years, specializing in the novice children. She has been coaching for Calvary since 2008. She considers it a huge blessing to impact these kids for the Lord as well as teaching them the joy of competitive swimming. Isaiah 43:2 “When you pass through the waters, I will be with you.” 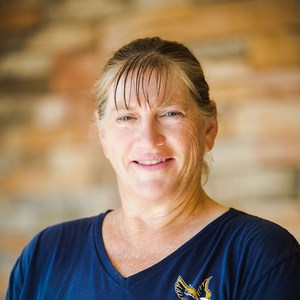